In this Regression Testing guide, we will learn what is regression testing and the following.

What is Regression Testing?

Regression Testing is a process to make changes to an older program and also ensure that the old program still working even after making changes to a program. It is a normal part of software development in larger companies, performed by code specialists. Before the release of a new version of a software product, old test cases run against a new version to make sure that old capabilities are still working.

Here we are going to have cases to understand the example of regression testing.

Regression Testing is not dependent upon any framework or development language. However, the user needs to verify that bug fixes and newly added features do not affect the previous version of the software.

Consider that we have a software application with functionality: A1+B1. While testing that application, a bug gets identified. Bug-fixation processes, including few changes in the code, are being carried out to resolve the bug. However, some existing functionality of the software application also gets affected in the bug removal process: B1-A1. Thus, regression testing is carried out to check whether existing functionalities have been affected or not along with the detection of any new bug or issue in the event of changes and bug-fixation.

This is the most basic example of regression testing. These regression test examples can be further elaborated depending upon the project and its requirement.

What are the types of Regression Testing?

There are three types of Regression Testing. 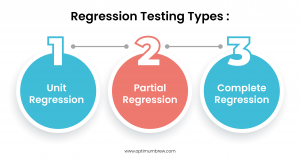 Unit Regression Testing is done during the unit testing phase and the code is tested as a single unit without any dependencies. Dependencies if any are temporarily blocked to test the unit independently.

Partial Regression Testing means when regression testing is done on a module where the change in the code is related to that particular module and there wont be any change impact on other modules.

Complete Regression Testing means when regression testing is done on a number of modules where the change in the code is related to the other module is uncertain.

What are the Techniques of Regression Testing?

Software maintenance is the process of modifying a software application which includes improvements, bug fixing, deletion of existing features, and optimization. When we do these modifications, the system may work incorrectly. To avoid issues while modifying the code, we do follow regression testing techniques. These techniques help us to eliminate the risks associated with the modifying code.

Following are the various techniques. 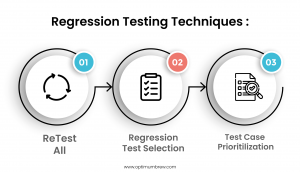 All the test cases in the existing test bucket or test suite are re-executed to verify that there are no bugs that occurred due to the modified code. This is a very expensive method as it needs enormous time as well as resources when compared to the other techniques.

Reusable test cases – Test cases that can be used in succeeding regression cycles.

By using this technique, we select the test cases with high priority first to run instead of a medium and low priority ones. Test case priority depends on its business impact, frequency, and criticality.

How does Regression Testing Work?

It is done manually. However, as application development takes time, more and more functionality keeps increasing the scope of regression; therefore this Testing is executed in an automated way.

While preparing a test suite for regression, consider the following –

What are the Benefits of Regression Testing? 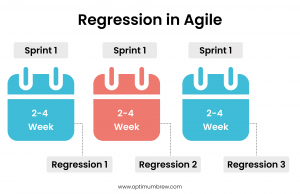 Now adays, most of the organizations are following Agile practices. Agile works in an iterative and incremental method. Developers work on new functionality and release them in every 2-4 weeks as sprint release. In agile, it is sure that for every 2-4 weeks once there will be a code change. In this case, the regression tests help in testing the new code change in every iteration to make sure that tested application continues to perform correctly after every iteration.

What are the Best practices of Regression Testing?

To do this testing, select test cases in the best way. Best practices are as follows –

Difference Between Retesting and Regression Testing

Now that you understand both retesting and regression testing, let us dive into their key differences.

What are the best Regression Testing Tools?

If your software undergoes frequent changes, then regression testing costs will be very high. In such cases, using manual testing can increase test time as well as costs. However, automated regression testing is an intelligent choice in such situations.

Automaton testing is an area where we can reduce the efforts by using automated regression testing tools. It is an efficient as well as time-saving method. At the same time, the extent of automation depends on the test cases that will remain re-usable over time.

Most of the regression testing tools available in the market are record and playback types. Selecting a proper testing tool is necessary to maintain the quality of software.

Here is the list of top regression testing tools:

It is one of the most critical aspects of Testing as it helps to deliver a quality product, providing ensure that change in code, whether it’s small or large, should not affect the existing or old functionality. A large number of available automated tools help in the automation of a regression best test case. A tool should have the ability to update a test suite, as the Regression test suite needs to be updated frequently.

STLC is a step-by-step approach to testing, where QA, throughout a sequence of predefined steps, ensures the quality of the product.
Read More