What is JMeter? Introduction & Uses 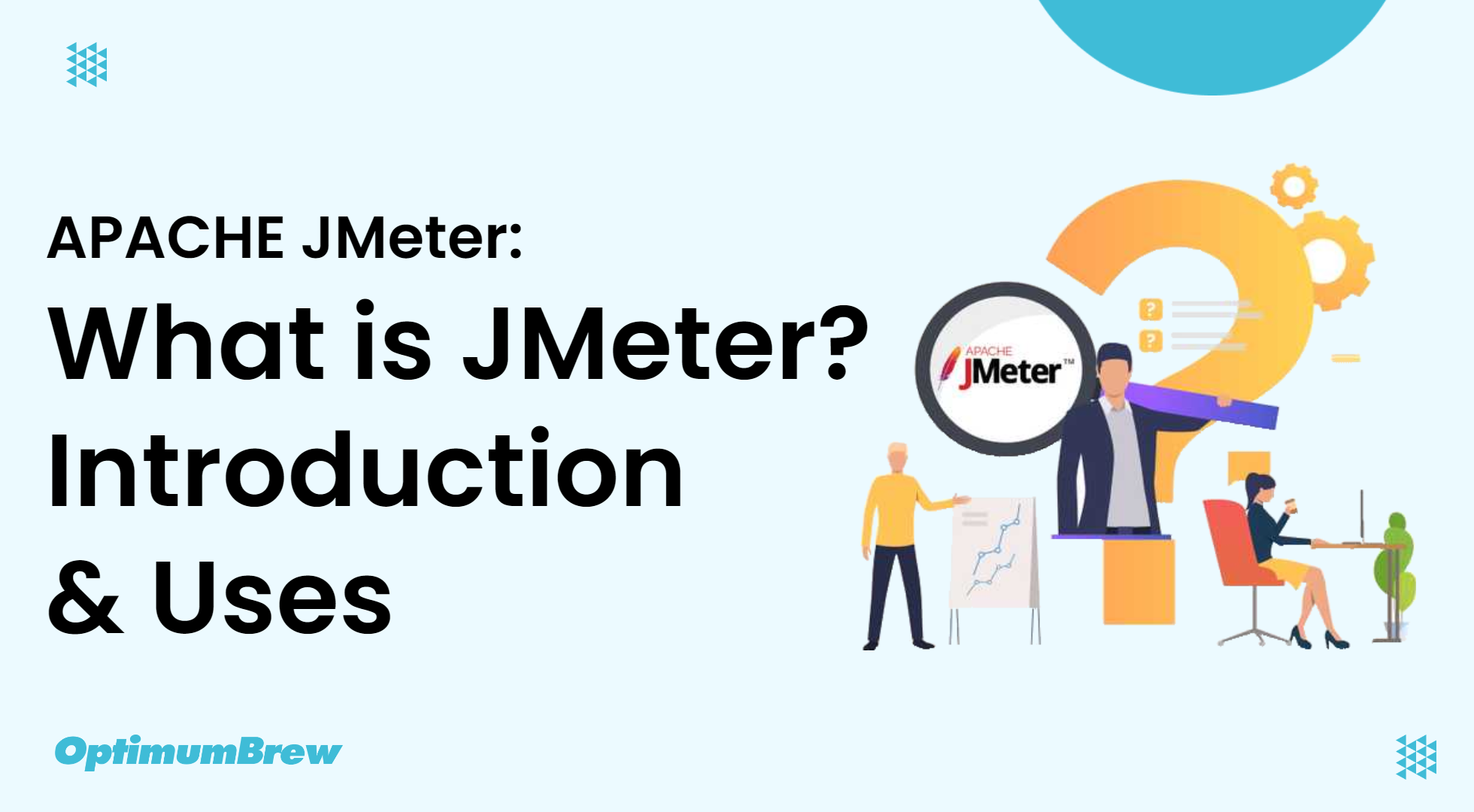 There are many test automation tools available in the market today. WebLoad, LoadNinja, LoadRunner, and LoadUIPro to name a few. But it is JMeter that has become a trending name in the industry.

Why JMeter is gaining popularity among app testers and app development industry? Does JMeter truly deserve the popularity it is gaining?

To answer this, we have to start with the basics.

JMeter also known as ‘Apache JMeter’ is an open-source, 100% java based application with a graphical interface. It is designed to analyze and measure the performance and load functional behavior of web applications and a variety of services.

JMeter is mainly used for testing Web applications or FTP applications but currently, it is applicable in functional testing, JDBC database connections, Web services, generic TCP connections, and OS native processes. You can perform various testing activities like Performance, Load, Stress, Regression, and Functional testing, in order to get accurate performance metrics against your web server.

JMeter was originally written and developed by Stefano Mazzocchi of the Apache Software Foundation. It was primarily written to test the performance of Apache JServ(currently known as the Apache Tomcat project). Apache redesigned JMeter to enhance the GUI, to add more features and functional testing capabilities.

JMeter is not a browser and it doesn’t render HTML pages like any browser does, rather it works on a protocol level.

Following is a list of protocols supported by JMeter:

Why do we use Jmeter?

In addition to load testing, testers can use Apache JMeter to perform performance, spike, and unit testing.

While JMeter has gained immense popularity in Load testing, it is also a great tool to test other application areas like APIs, FTP servers, database performance, etc. It helps to measure and analyze the performance of web applications and other variety of services.

Let’s say that your organization recently launched a commercial web application that will be accessed across the globe. Your organization is expecting that it will have hundreds and thousands of concurrent users accessing the website. So, the web servers must be able to handle the user action efficiently. 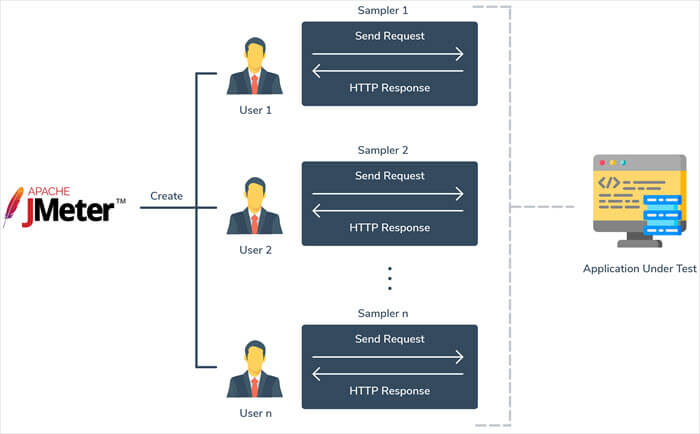 Your organization is keen to know how the web servers will perform in such situations.

As a tester, you need to provide results in such a scenario. It is not feasible for any organization to arrange that many testers to manually check the performance.

The next question which arises here is: How would you test your website in such a situation? How can you apply such a huge load on web servers and get results?

In such situations, a tool that can simulate real-time user’s behavior is required and thankfully, JMeter is such a tool that can help you do such testing. JMeter has proved to be the best tool for load testing so far.

Thus, with the help of JMeter, we can simulate load on the server, networks, or objects which are coming from different machines to implement real-world scenarios. 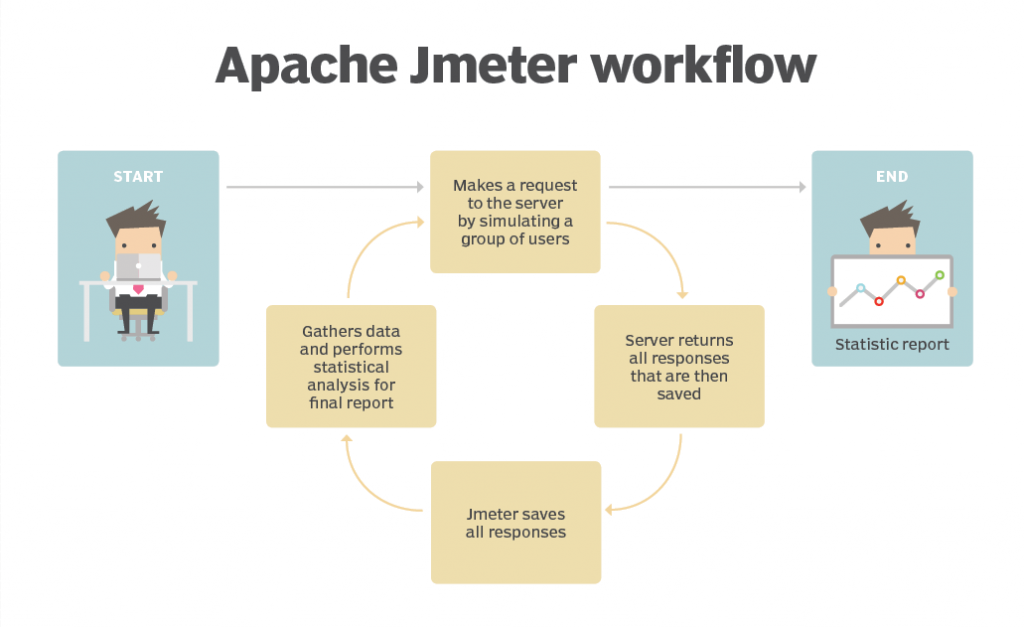 Before we begin with JMeter load testing, make sure you have JMeter installed in your system.

In this, we are going to create a basic test plan in a few simple steps. 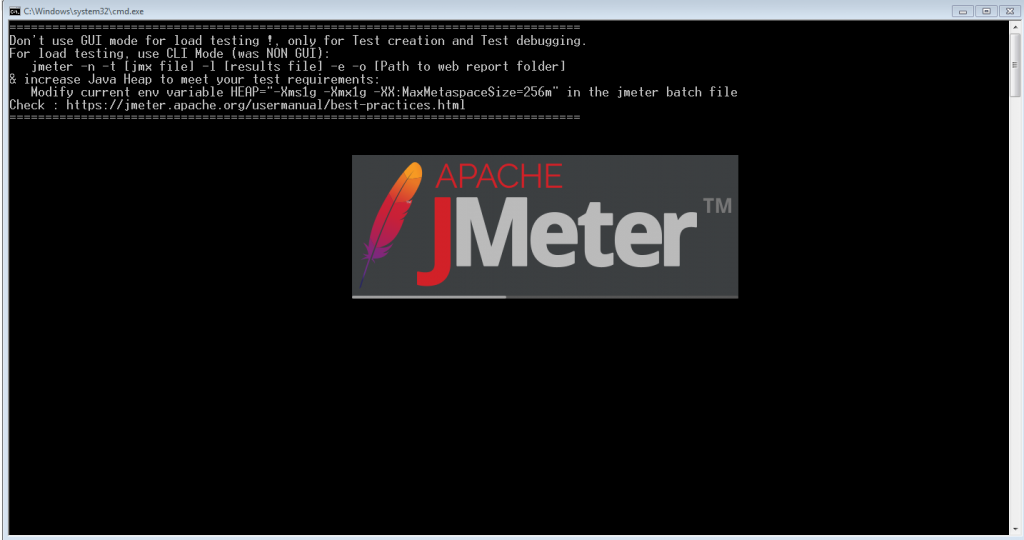 This might take a while, and then the JMeter window will open on the screen.

Now once you click on Thread Group, there are three things on the screen that are important concerning the load test:

Action to be taken after a Sampler error: These are the actions that can be taken by the user if an error occurs in any sampler. By default, this is set to Continue. let us see what all are the options that actually can be used

Note: In all properties of the thread group the time is taken in seconds, not in minutes or milliseconds.

For example, if you set the number of threads as 100; JMeter will create and simulate 100 user requests to the server under test.

Any number of HTTP requests can be added. Further, all you need to do is repeat the above step.

Listeners are something that is used to provide the outputs of a load test. There are different types of listeners present in JMeter, and a good deal may be added using plugins.

The listener we will use here is the Table, as it is comparatively easy to read. 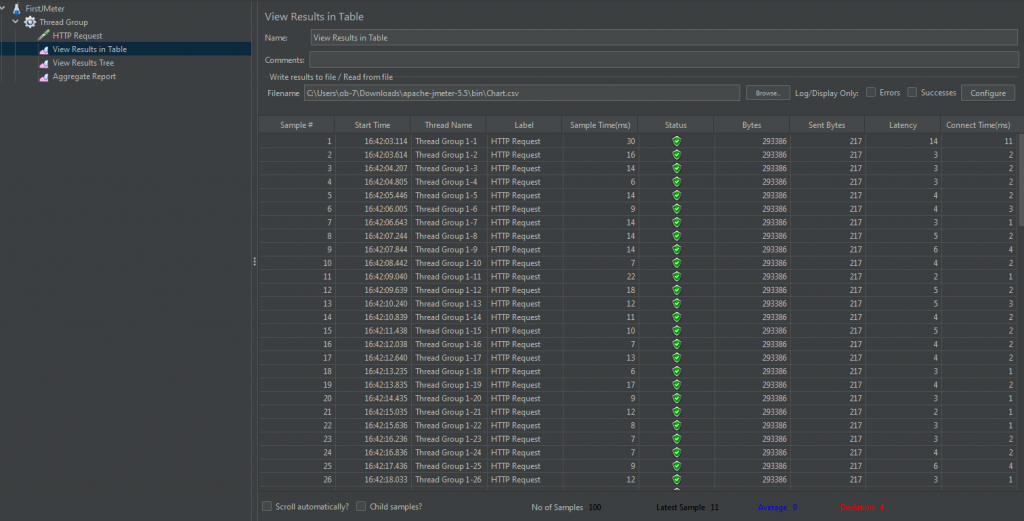 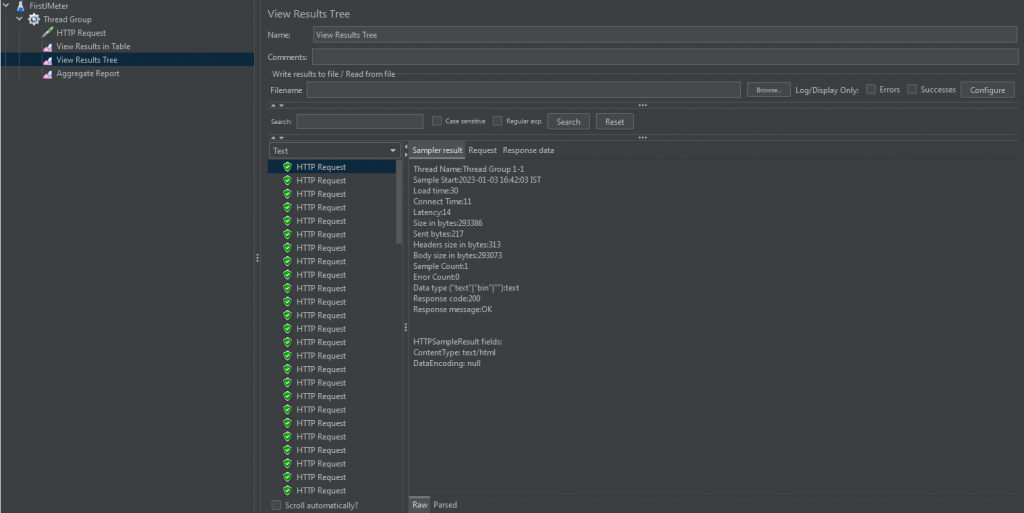 In the feature image above, you can see the Aggregate Report has 13 headers in its table. Let see what do they mean and how to calculate these data?

Example 1: Thread Group has a configuration

In other words, the median is the time in the middle of a set of results. 50% of the samples took no more than this time; the remainder took at least as long.

Example: I will run this test with 100 threads and loop count 1. Refer result below: 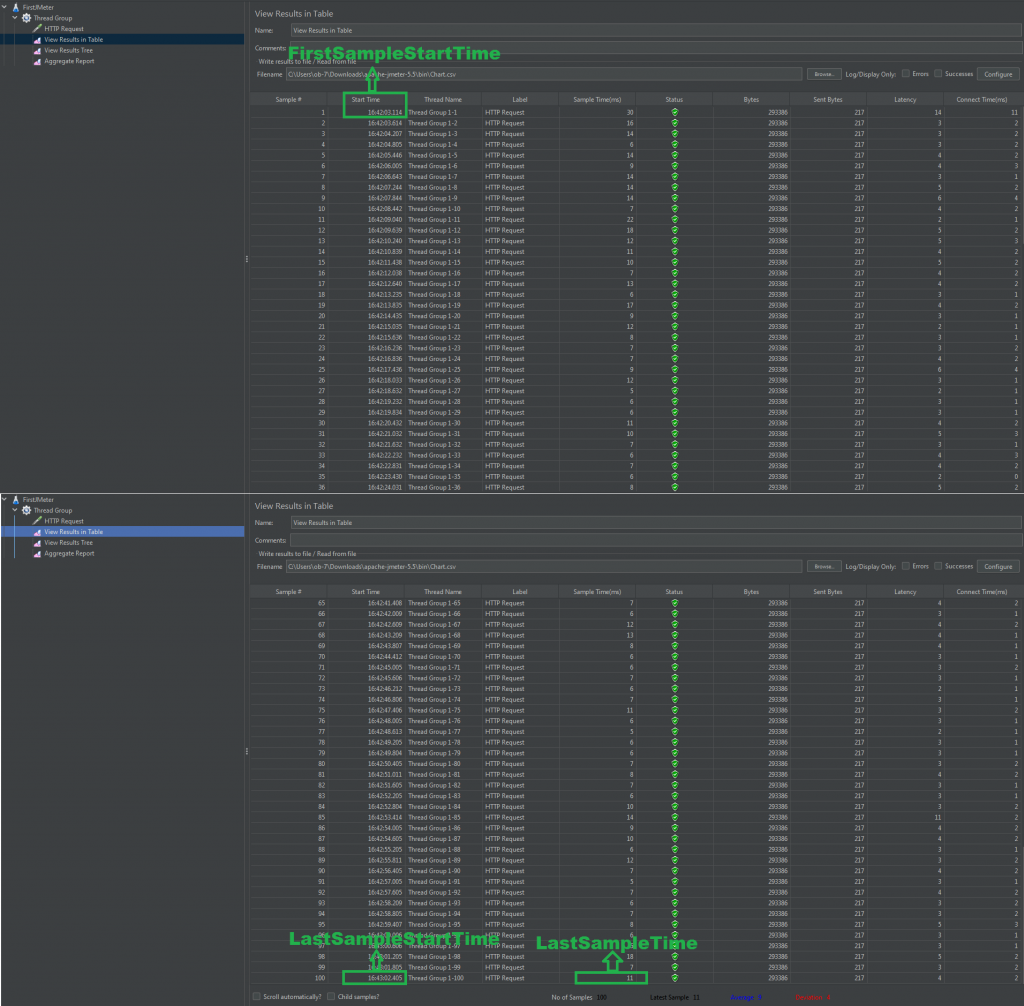 I used View Results in Table to collect the Start Time, and Response Time in the easiest way.

Let’s check with the Aggregate Report:

And it can prove that the formula works well. Let’s check it by yourself.

Note: The time unit is chosen so that the displayed rate is at least 1.0. When the throughput is saved to a CSV file, it is expressed in requests/second, i.e. 30.0 requests/minute is saved as 0.5.

You can try the same demo by fluctuating the values of the number of threads or the loop. When you fluctuate these values, the sample time value or other output values will begin fluctuating, telling you if the system is overburdened or just fine.

By now, you would have understood everything you need to know about basic JMeter and its usage in load, performance, and API testing. Then finally, you understood the process of Load API Testing using JMeter with a hands-on demo.

To know more about JMeter API load Testing with real scenarios, you can have a look at this API Load Testing Using Apache JMeter (Step by Step Guide). 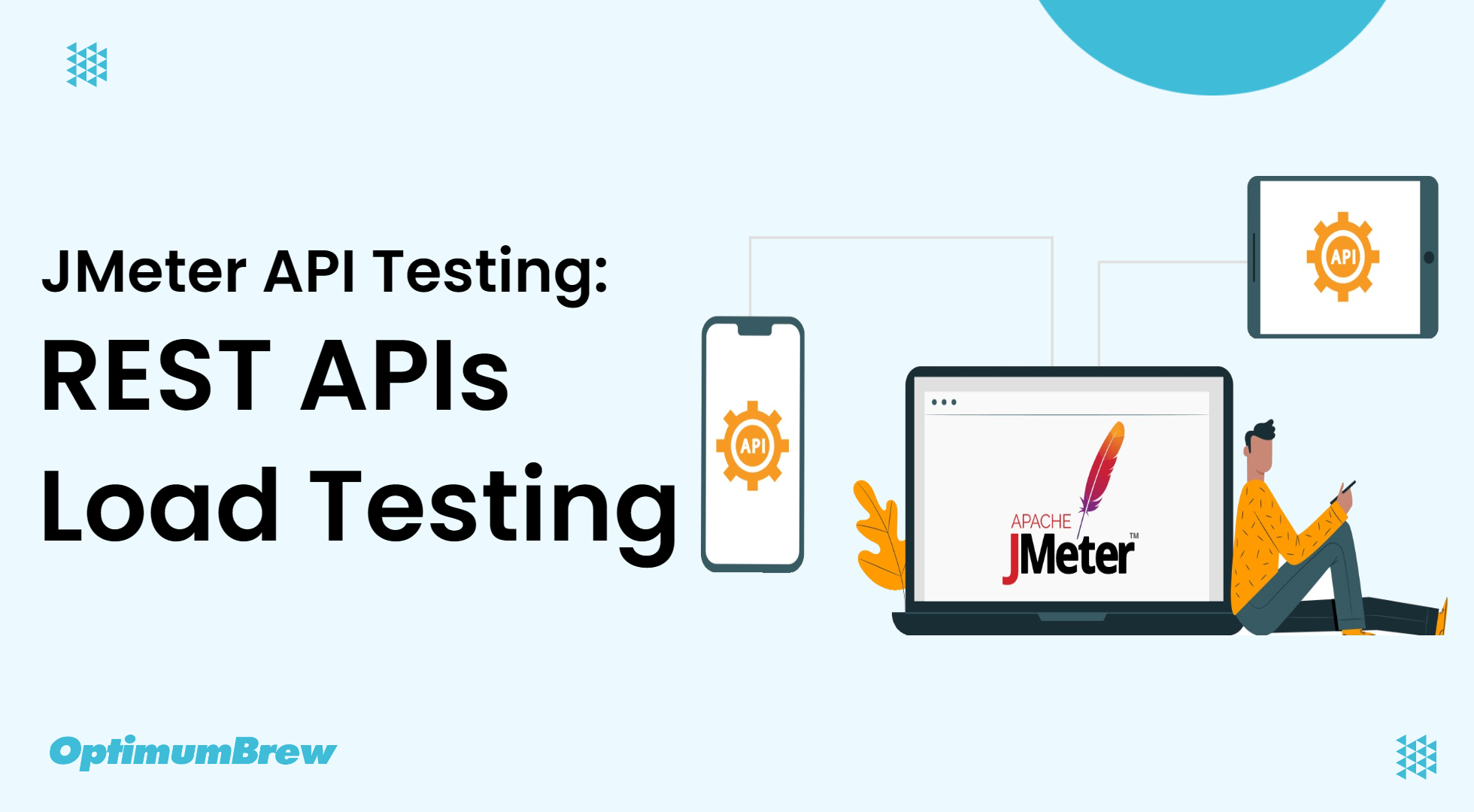 What is JMeter? Introduction & Uses

The Simple Test plan of JMeter is that one user is hitting only one API/request. But in the real scenario, multiple users will always be there who will hit either a single API or multiple APIs.
Read More

Regression Testing is one of the important aspects as it helps to deliver a quality product by making sure that any change in the code whether it’s small or large does not affect the existing or old functionality.
Read More